Little Monkey Apps Mystery Number is the digital version of the game 'Guess my number' or 'higher and lower' or a one hundred pocket chart or number line activities traditionally played in classrooms as mathematical warm ups.

The App provides a digital display so that small groups, individuals or partners can play these games at the one time and quickly reset the number line or chart, unlike traditional pocket charts or displays. 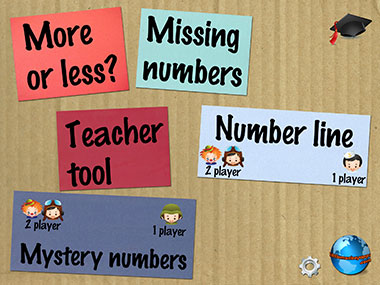 Modules include 'Teacher tool' 'More or Less', 'Missing Numbers' What's my number on a 'Number Line' and a hundreds chart, 'Mystery Numbers'. Some activities are manual allowing for a two player mode or one player against a computer. Stars are awarded for correct answers. After ten stars, students are asked whether they wish to continue playing or return to the front menu. Settings allow the user to decide whether the charts begin at 0 or 1.

As with all Little Monkey Apps, this App is designed to be used in conjunction with hands on activities and teacher interaction. Whilst some of the sections or 'modules' can be completed without teacher direction and encourage student-directed learning, our Apps are NEVER designed to be used as a 'learn by yourself' without teacher-student interaction.

All sections of this App can be played without an iPad, using paper or pocket charts. (And yes, we do encourage you to still do this!) The benefit of this app is that you can have multiple games at different levels going on at the same time, you NEVER lose the pieces and if you're in an 1:1 iPad classroom, why not use tried and true games that teachers have used forever, but on the iPad! 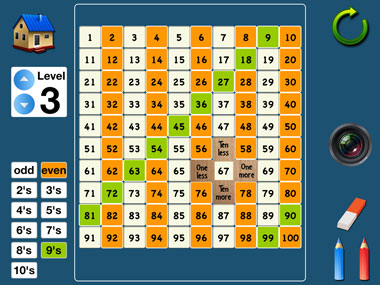 The teacher tool is designed to be a blank canvas for teachers to use with small groups or individuals. It contains a blank number chart in four levels varying from 0-30 up to 120. The chart has buttons to highlight odds, evens, and counting patterns 2's-10s. Tap to turn on, and tap again to turn off.

This tool also includes two coloured pencils and eraser, a camera tool Which can be very useful for recording a learning experience for portfolio planning or to document new learning.

The ten less, ten more one less one more 'box flap' can be moved to any number by dragging the middle of the object, then touch the fold down sections to sneak a peek at one more, one less, ten more ten less, useful for place value games. 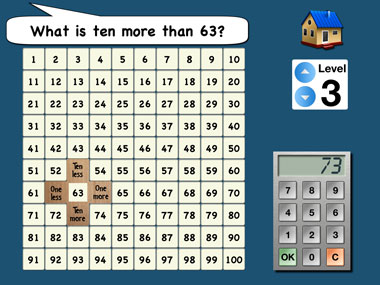 This game utilises the Box Flap to show one more, one less, ten more or ten less. Users asked questions regarding a given number and answer using the calculator keypad. Students may sneak a peek at the answers by tapping to lift the box flap. Users can change the starting number from 0 to 1 using the settings button in the front menu. 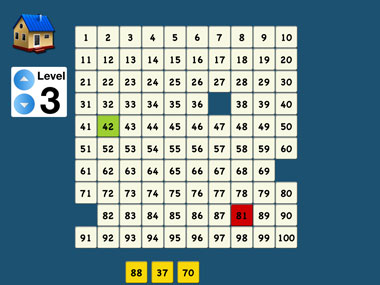 Students are presented with a number chart with missing numbers. They place the missing tiles back into their correct position. Before tablets in the classroom, you might have played this game in the classroom using a hundreds pocket chart (or even an old peg board and nail version). Simply pull a few numbers off, throw them on the floor and ask the students to help you put it back together again. This way, there are no more missing numbers underneath a table! (My classroom had a permanently missing number 33.)

One player and Two Player Higher or Lower Game 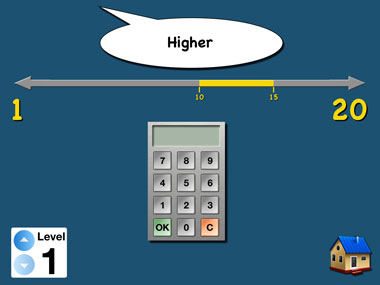 One player is player vs computer. The student inputs a number on the calculator and the computer replies with higher or lower, highlighting the remaining section of the number line left. 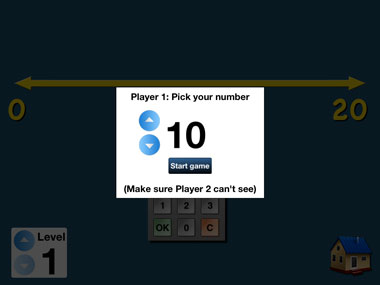 Two player. Player One is asked to pick a number, without player two seeing. Player Two plays as if playing an individual game. The computer aids the game by replying higher or lower.

One player and Two Player

This game encourages questioning that narrows the range of a mystery number. 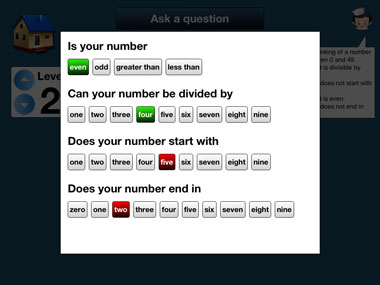 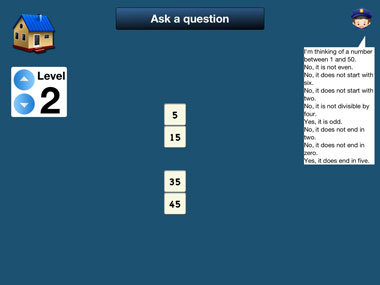 Player one picks the number. Player Two must VERBALLY ask Player One, then Player Two (or One) can click to remove the numbers that do not match that question. In this game you are able to guess the number outright, but as this is not efficient, students should be encouraged to ask 'good' questions to narrow the search for the number quickly. The benefit of 'setting' the number is that the student can't 'change' or 'forget' the number to make the game last longer!